Most men want to find out what sex questions to ask a girl over text to quickly turn her on.

That’s why today I’ll give you a list of some highly effective questions that you can ask women while texting them. These questions are perfect for creating sexual tension and attraction that often leads to intimacy. You can use them for women of all kinds, those you meet on the street through those you meet on the top hookup apps we have actually seen work consistently.

We all know that meeting women face to face is where the real magic happens. However, you should not underestimate the advantage that a well-crafted and perfectly-timed text before meeting your date will give you.

It’s not difficult to learn what to text a girl to turn her on. Even an innocent-sounding message with sexual undertones can greatly affect the outcome of your next date. That’s because anticipation is a large part of attraction and arousal.

For these questions to work, you have to set a flirty and sexual undertone straight away when texting. Don’t just text something like “Hello, what’s up with you?” at the start because then it will be extremely difficult to transition. Instead, text something like “Today I passed a gorgeous girl on the street who reminded me of you. Except you’re WAY hotter!” Texts with sexual innuendos work wonders as well.

When you text her that or something similar which will pique her interest, you wait for her reply. If she replies in a positive way, then you can begin gradually increasing the sexual content of your messages. The point is to engage her in a way which implies that you find her attractive and want her sexually. 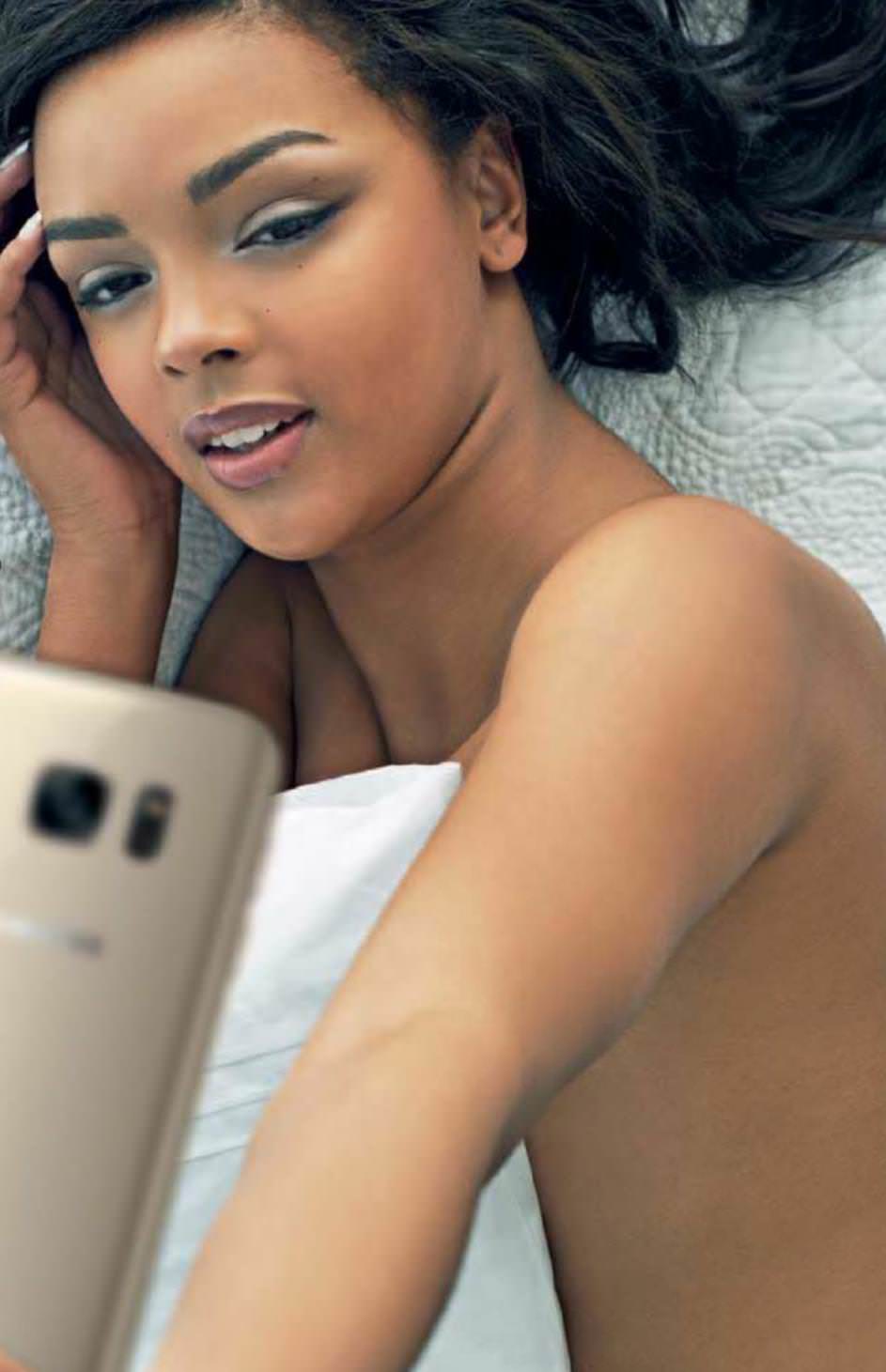 Just don’t barrage her with any sexual questions until she responds favorably because then it’ll never work and just seem creepy.

Finally, show women that you’re comfortable with the topic of sex. This will allow them to be comfortable with it with you, too. If you then use the following questions correctly, they will build strong anticipation before the date.

These questions can also work over messenger or if you are talking back and forth online.

If your dance card is full, here are some effective sex questions to ask a girl over text:

1) What do you think you look the sexiest in?

This question is great to start things off slowly so that you can escalate later.

It’s not just an excellent segue into further sexual talk but it can also provide you with a lot of useful information about the woman you’re interested in. It gets her to talk about her sexy clothing and about what outfits she likes to wear to look hot.

After this question, ask her why those outfits make her feel sexy. Ask her how important it is to her to look sexy to herself and to guys that she’s dating.

Don’t forget to tease her a little bit on her answers to spike her emotions and spark strong attraction towards you. But most importantly, don’t forget to set up a date with her with the promise that she’ll have to show you some of her best outfits later! That’s a great way to have the date end up with you both having a little fun under the sheets.

If you are still struggling to meet a woman (especially if you are looking for something shorter term and no commitments at all) try out this website for some casual sex action.

2) Have you ever watched another couple making out? What did you feel at that moment?

This question is a bit sneaky because it gets people to think about intimacy a lot. That’s because when most people watch others make out, have sex or perform other acts of intimacy, they usually also become aroused. The obvious example of this would be when people watch pornography. While pornography is an extreme example, people still feel similar feelings of intimacy when watching others kiss passionately. Although those feelings won’t be nearly as strong.

Also, the follow-up question is far more important than the first. If you just ask her if she’s ever watched someone makeout, she could answer with a simple “Yes” or “No.” That conversation would quickly be over then.

The point is to get her to think about that moment and get her to describe it. It’ll often make her think about intimacy and possibly even sex. She’ll start associating those feelings with you because you’re the one who brought them on.

Finally, in case she’s never watched anyone makeout before, you can tease her about it playfully. Then ask her “What do you think you’d feel in that moment? Describe it to me.” This could open up many doors for you because for women, imagination plays a huge role in sexual arousal.

3) Have you ever had a sexual encounter while in a public place?

This question is a bit risky but it’s perfectly fine to ask if you’ve already led the conversation towards more sexual topics.

You get to find out whether she’s naughty or not and see if she’s sexually adventurous and open to such things. It’ll also have the double effect of making her think if you’d be up for something like this while in public. Her imagination will start going wild and she’ll be full of anticipation.

It’s one of those wonderful sex questions to ask a girl because it can easily turn your next date in your favor. Because if you engage women’s sexual imaginations and their anticipation grows, you’ll be much more likely to get laid.

It’s also a great opportunity to talk to her about her naughty side and then find ways to bring it out.

4) You wake up tomorrow as a man – What dirty things do you do all day?

Make absolutely sure to tease her about her responses and make it sound like she has a very dirty mind. If you do it right, this “innocent” question can lead to many great topics of conversation with her. It’s rife with opportunities to get to know her naughty side, what she thinks about men, what turns her on, and more.

5) If you had X-ray vision, what part of a man’s body would you look at first?

Another sex question to ask a girl over text that cuts straight to the chase and sets a very intimate undertone.

Of course, women may try to avoid it and play it off by saying “I’m going to look at your face” or something obviously non-sexual like that. Make sure to tease her about such an answer and imply that she really has a dirty mind but is desperately trying to hide it.

Saying something like “Riiight, I’m sure you wouldn’t notice the huge dangling thingy right in the middle. . .” will often do the trick and usually make her blush. A follow-up text saying “Are you blushing right now?” will seal the deal.

Again, make sure to ask this question when you already know that she likes you and that you’re both comfortable with talking about sexual topics.

6) Why are you making me think all these thoughts about you?

This is another awesome question that builds anticipation before the date if done correctly. It also gets a reply almost every single time because women will want to know what type of thoughts you’re thinking about them.

Plus, it creates a lot of sexual tension because you’re basically shifting the blame of escalation on her. By that, I mean that you’re accusing her of being so damn hot that you can’t help but think all these naughty thoughts about her. Thus shifting the blame and making it seem like she’s doing this to you on purpose..

7) What’s your favorite part of a man’s body?

This is another one of those sex questions to ask a girl that segues perfectly into naughty-talk territory.

That’s because all women have a favorite part of the male body. For some, it may be a man’s face, his prominent jawline, muscular arms, legs, abs, ass, or even their belly. Yes, even a dad-bod is often something that’s attractive to certain women who have that particular taste.

Once you start talking to the woman you like regarding what she enjoys about a man’s anatomy, you should always playfully tease her on her answers. Then, ask her “What’s the sexiest part of your body?” and talk about that.

Next, it’s all about making innocent-sounding comments, sexual innuendos and moving the topic into increasingly sexual territory. If you do it right, this topic nearly always ends up with both of you texting about what’s between a man’s legs and how much women enjoy that part of the male anatomy.

8) What are you wearing right now?

Asking her what she’s wearing right now can lead the conversation into exciting territory. Who knows, she might be wearing absolutely nothing if she’s getting ready to shower or for bed.

In any event, this tried and true question opens the door to lots of flirting and sexy banter. Even though it’s a bit overused, it’s still one of the greats. I’d guess that there are probably no sex questions to ask a girl that have been used by people more often than this one. And there’s a really good reason why — it simply works!

9) Would you rather give me a massage or get one from me?

This is a playful question that builds anticipation for your date and can often lead to sex. Talk about massages in general, describe them in a really appealing way and how much you enjoy them, so that she starts wanting one.

More often than not, she’ll answer that she’d rather get one than give one anyway. But that’s where you turn it around and say something like “Sure! But only if you ask me very nicely later tonight . . .” or “If you bribe me enough . . .”

If you make the idea of a massage sound really appealing to her, she’ll definitely want to receive one later. That can lead to a very intimate evening.

If she’s already into you, this is the sort of sex question to ask a woman through text that will get you laid the fastest.

She’ll either be up for it and then you simply invite her in or go to her place. Or she’ll think that it’s not the time for that yet but still see that you’re interested in her sexually. If she then goes on a date with you after that, it means some “Netflix and Chill” is definitely on the menu later. That is, if you play your cards right.

Remember, texting women in a way that engages their sexual imagination and makes them think about intimacy with you is all about timing and creativity.

If you want to ask girls sex questions over text, mornings or afternoons are a horrible time to do so. Most people are busy at that time with work, school or other errands.

The best time to text would be in the early evening. Early evenings are almost always a good time to text the woman you like. Her work will be over, she’ll be done with all her errands, with the gym and with her dinner. Now she’ll be settling down in her casual clothes in front of the television or the computer, or to read a something and wind down.

At this point, she’s comfortable and she feels good. She is in the perfect mood to be romanced by you. If you engage her sexual imagination now, she may even go to bed later thinking of you. Imagine how well your future date can go if she has a wet dream about you.